Paper of the Week: 9th October 2019 – Can we spend too little or too much on healthcare?

Paper of the Week: 9th October 2019 – Can we spend too little or too much on healthcare?

This week’s blog is brought to you by: Dr Tim Wilson

What level of domestic government health expenditure should we aspire to for universal health coverage?

“Our analyses point towards a target of government spending on health of at least 5% of GDP for progressing towards universal health care. This can be supplemented by a per capita target of $86 to promote universal access to primary care services in low-income countries.”

At a governmental level, any money going to healthcare represents budget that could otherwise be spent on early years support, education, welfare, public libraries and alike. Therefore, the outcomes (benefits) that society and individuals derive from healthcare need to represent good value. The paper asks the question about the minimum countries should spend on universal healthcare 5% of GDP. So, in countries spending more than this, it is paramount they use that money wisely as it amounts to money that could otherwise be spent on a teacher or support for a mother.

This paper is a couple of years old and in a less well-known journal but it is interesting because it tries to ask how much a country should spend on healthcare. Using Donabedian’s approach of considering effect size against resources they analysed spending in multiple OECD countries.

There were two effects they looked for:

Their conclusion was that 5% of GDP was the minimum spend to achieve universal healthcare with minimum workforce numbers and acceptable out of pocket expenditure.

On Donabedian’s graph 5% could probably be placed somewhere like this.

Clearly countries wishing to increase the benefit from healthcare could spend more on GDP and see better outcomes. But there is a law of diminishing returns- so the value of the investment in healthcare is falling.

For instance, this rather simplistic correlation of GDP spend against mortality amenable to healthcare looks like this: 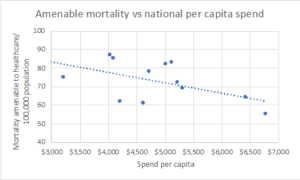 Countries spending more than the 5% the paper suggests can gain greater benefits for their population (in this case a reduction in mortality amenable to healthcare). But even this simplistic graph demonstrates that some countries are getting better value (as measured by reduction in amenable mortality vs GDP spend). For instance, Australia, spending $4.2k has a far lower mortality amenable to healthcare than the UK which spends $4.1k per capita.

The graph above excludes the US, because something interesting happens when it is included: 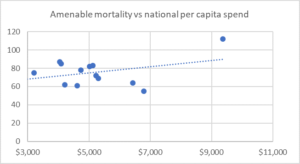 This is because the US has, in all likelihood, passed the point of optimality. Donabedian’s analysis also included the rising harm due to healthcare- the more we do, the more harm we cause. This means that at some point, more resources, more healthcare, and outcomes fall as shown by the graph below. 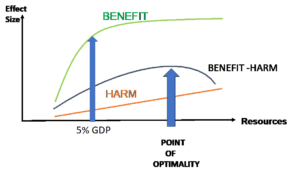 Hence the rise in mortality amenable to outcomes seen in the second graph above. To further reinforce this point, the Commonwealth Fund quality spend tool shows us this effect in the US (each dot represents an area within the US- the y axis shows quality and x axis shows spend). 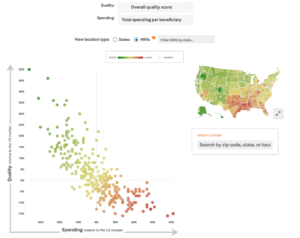 It is clear, the more that is being spent, the worse the outcomes being achieved.

A place like England, which spends only around 9.6% of GDP of healthcare is very different to the US which spends almost 17.9% (sources ons.gov.uk and cms.gov). Or is it? The spend on musculoskeletal conditions varies between £44m/ million pop and £153m/ million pop. Does this mean that in areas of high spend they are breaching the point of optimality, or in areas of low spend they are not meeting some basic minimum levels of spend? It is possible.

So, in conclusion this paper provokes some interesting points: