Paper of the Week 21.03.2019: Bilateral versus Single Internal-Thoracic-Artery Grafts at 10 Years

Paper of the Week 21.03.2019: Bilateral versus Single Internal-Thoracic-Artery Grafts at 10 Years
For privacy reasons SoundCloud needs your permission to be loaded.
I Accept

Among patients who were scheduled for CABG and had been randomly assigned to undergo bilateral or single internal-thoracic-artery grafting, there was no significant between-group difference in the rate of death from any cause at 10 years in the intention-to-treat analysis.

This study shows that in the case of CABG more in healthcare is often no better. Once again Avedis Donabedian’s illustration about optimality has been demonstrated.

This is another example of the principle first described by Avedis Donabedian and expressed through his diagrammatic representation of the relation between benefit and harm shown below that more is not always better, in this case increasing the number of coronary artery grafts. 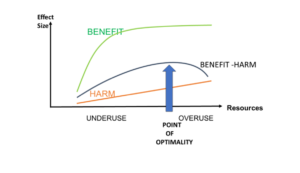 At least there was no increase in the harm done by the bilateral operation and the accompanying editorial concludes “It should still be performed in patients with a low risk of sternal wound complications and a good long-term survival prognosis and by surgeons who are experienced in performing multi-arterial CABG procedures.” (Coronary Bypass Surgery — An ART for Dedicated Surgeons Head, S.J.and Arie P. Kappetein, A.P. n engl j med 380;5 nejm.org January 31, 2019 489-491.

The dedication of the researchers is to be congratulated as should be the willingness of the prestigious NEJM in publishing this negative result. The trial was obviously conceived and planned many years ago but looking at it through the lens of 2019 there are two issues that would merit more attention

Firstly the resources; was there a difference in used, either financial or operating theatre time or the carbon used or the time of patients and carers? and

Secondly how were  the choices made by the people having the operation. The five year report of the trial simply states that  “Each patient was required to provide written informed consent” but it is not clear what number ,if any,  of the patients turned down the offer of the operation, o , to put it another way, did not make an informed request for the operation after decision making taking into account each individual’s preferences