Paper of the week 08.02.19: The Medicalization of Population Health

Paper of the week 08.02.19: The Medicalization of Population Health
For privacy reasons SoundCloud needs your permission to be loaded.
I Accept

…Although these efforts are indeed necessary and generally positive, they are also woefully insufficient if the overarching goal is improved health outcomes and health equity at the societal level…

Population health management has become fashionable and who could gainsay this trend? It seems right and proper for the health service to move upstream and tackle the root causes of many of the problems it faces. But this article emphasises that although it is good for a health service to lend support for efforts to reduce risk factors in the population they serve, the fundamental causes of ill health, deprivation and inequality cannot be tackled by well paid health service staff.

Even risk stratification technologies, a key feature of population health management, does not have a strong evidence base, as an NHS England titled ‘Next Steps for Risk Stratification in the NHS’ https://www.england.nhs.uk/wp-content/uploads/2015/01/nxt-steps-risk-strat-glewis.pdf suggests.

Rather than seeking to right the wrongs of society, health services should take steps to ensure that they are making the best use of the resources that the population has invested, to best effect for all the people with a particular need in the population. At present, people from deprived sections of the population are less likely to refer themselves, or be referred, than people from wealthier groups. Health services need to tackle healthcare inequity before they start trying to right the wrongs of the world. This narrower approach was called population healthcare in a Public Health England workstream.

Population healthcare focuses primarily on populations defined by a common need which may be a symptom such as breathlessness, a condition such as arthritis or a common characteristic such as frailty in old age, not on institutions, or specialties or technologies. It is focused on the Third Dimension of healthcare. 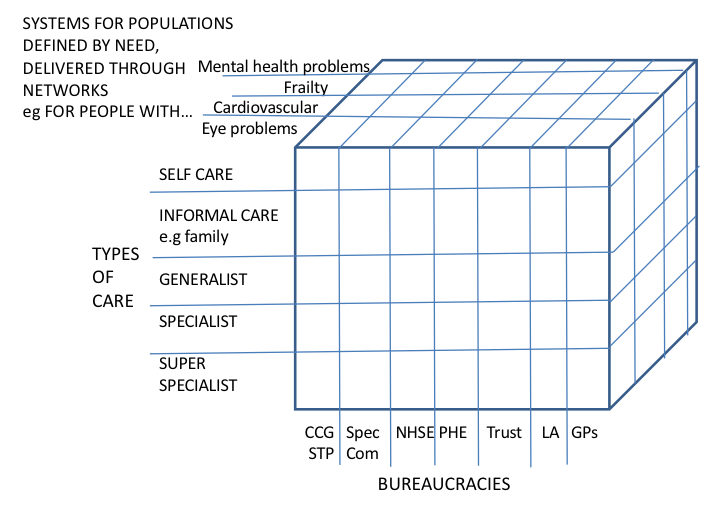 Its aim is to maximise value for those populations and the individuals within them.