Five things the NHS can do to address the Marmot report; taking a population value approach

Five things the NHS can do to address the Marmot report; taking a population value approach

This week’s blog is brought to you by: Dr Tim Wilson, Managing Director

Health Equity in England: The Marmot Review 10 Years On. February 2020

The report highlights that:

The report makes recommendations in regard to

Marmot’s latest report has important messages for policy makers, but almost none for the NHS. Health inequalities have risen during a period when NHS spending has increased in real terms but spending on areas that address the broader determinants of health have fallen. There are five things the NHS must do to play their part.

The latest Marmot report is depressing but unsurprising. Over the last ten years life expectancy, especially healthy life expectancy difference between the most deprived and least deprived have widened. Life expectancy in women has fallen and stalled in men. But during the same period, the NHS has had real terms increases in spending, so why the problem?

Because, as most people know, healthcare is only a small factor in addressing inequalities. Estimates of the impact of healthcare on health overall vary between 10 and 35%, the rest being due to living conditions, early development, employment, genetics and alike. So, during a period of austerity, when spending has fallen in the areas which have the greatest impact on health inequalities – early years, education, environment and communities – it is perhaps no surprise that (healthy) life expectancy, and differences between communities, has taken such a hit.

Unsurprisingly then that the recommendations in this latest report only make passing reference to the NHS. But what are the five things the NHS could do tomorrow to reduce health inequalities with the £127bn at its disposal?

Health care can ameliorate the causes of inequality. But the evidence suggests that if you live a more deprived community with high health needs you are less likely to get access to good healthcare; Hart’s “Inverse Care Law”. This was true on the foundation of the NHS, true when the inverse care law was first described in the 1970’s and is true today. The evidence is it is worsening. 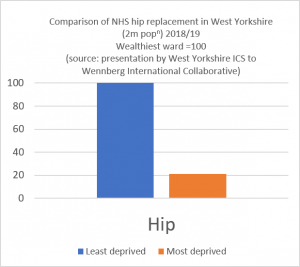 2. Do not cause ill health- seek instead to improve it

Spending £127bn a year gives many opportunities for creating good health and causing ill health through better employment. Are, therefore, all employees of people providing the NHS with services (including direct employees, services that have been outsourced or are suppliers to the NHS) providing a minimum of a healthy living wage and terms and conditions that promote good health?

3. Do not seek further resources until waste has been eliminated

Every healthcare service puts strain on the NHS, which leads to a demand to Treasury for more money and then pressure on other departments. We have seen ten years of NHS protection; real terms growth, albeit not at the levels the NHS has grown used to. As a share of the public spending the NHS is at a record high. 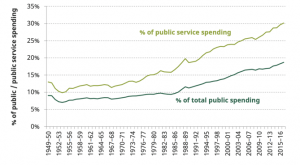 Spending on NHS as a proportion of public spending (Source: Institute for Fiscal Studies)

But there is clear evidence of waste in the NHS of 10% or more. We need to disinvest from those areas of wastes and reinvest elsewhere before we ask for additional funds.

4. Allocate resources on the basis of need

A core principle in founding the NHS was to provide service on the basis of need. However, whereas there is a needs-based formula to allocate resources to geographies, once in that geography (e.g. Clinical Commissioning Group, Health Board) there are huge variations in spending that show that resources are not being used on the basis of need. During the same period of increased use of cardiac stents we have seen falls in smoking cessation.

5. Support people to address the social determinants of health

The NHS can direct people to support services that can best help them address the broader determinants of health. This includes advocacy services, community groups and advice services. Many of these are being rolled out through social prescribing.

There is a 6th.  Actively participate in broad public sector efforts to address inequalities.

When all the above are being properly addressed, do spend time with other local public services to discuss the broader determinants of health and addressing inequalities. But remember, they have had to face cuts, their time is precious, and they might reasonably ask whether you are doing all you can with the £127 billion you have at your disposal.

Or see our paper of the week where healthcare in the US has handed over some of its money to another part of the public sector to provide better housing. Go with your wallet open.