Can equity be measured as accurately as quality?

Can equity be measured as accurately as quality?

This week’s blog is brought to you by: Professor Sir Muir Gray

There appeared to be general agreement that spatial equity is difficult to define…Although a wide variety of methods were used, the Gini coefficient was identified as the most common method of spatial equity analysis.

Equity is difficult to measure accurately but it should be included in every report on the performance of a health service.

Equity can be seen as something that is very complicated and difficult and best left to academics or it can be viewed as a simple concept that is of vital importance for every person delivering healthcare. Here is a simple, clear definition

“It is important to distinguish between two similar-sounding, but quite different, concepts: “equality” and “equity”. The former implies equal shares of something; the latter, a “fair” or “just” distribution, which may or may not result in equal shares.”

This review looked at ten different measures of equity and concluded that the Gini ratio was the most valid measure of equity in a society:

“The “Gini ratio” which is also called the “concentration ratio,” is the measure of the inequality of the income distribution most widely used by economists. This measure varies between 0 (perfect equality) and 1 (maximum inequality). In the case of England, the Gini ratio stood at about 0.65 near the beginning of the twentieth century, at about 0.55 near the end of the twentieth century, and at 0.32 in 1973, when it bottomed” out, not only in Britain but also in the United States and other rich nations.”

A simple approach for a health service is just to measure the number of people referred and treated from different sub groups of a population as shown in this classic study: 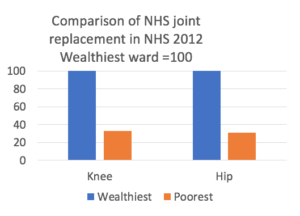 Access to NHS services is based on clinical need, not an individual’s ability to pay.